The tunneling machine (geokhod) of Tomsk Polytechnic University is being tested at the site of Kemerovo Experimental Mechanical-Repair Plant (KORMZ) for the first time. A 10-meter concrete block is an initial obstacle for the machine designed for quick tunneling underground. The trials of the unparalleled Siberian development are scheduled to complete in July. Scientists are set a task to verify capabilities of the prototype and make necessary improvements in order to produce commercial machines. 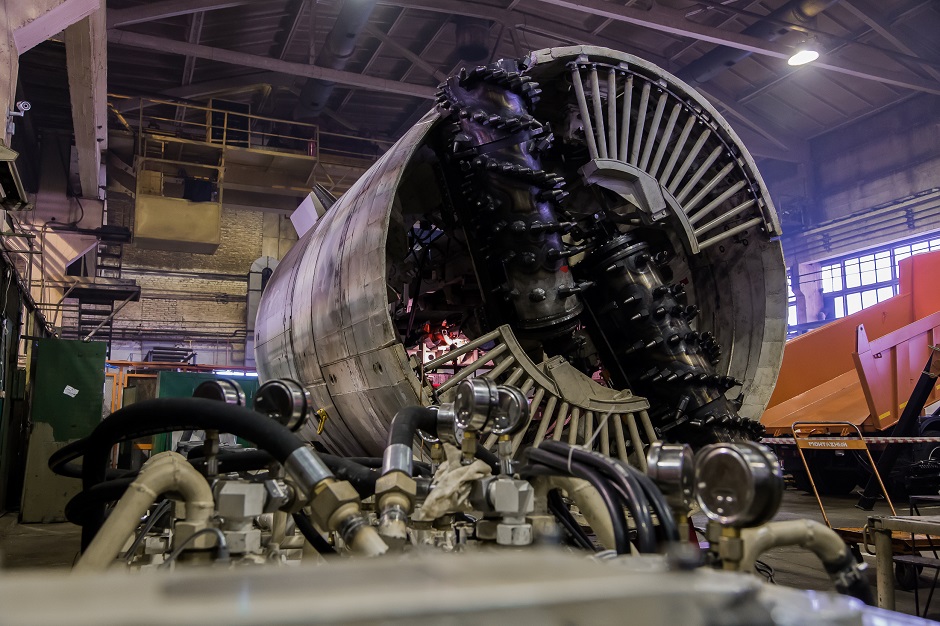 The tunneling machine was developed by scientists from the TPU Yurga Institute of Technology (YUIT) and the Coal and Coal Chemistry Federal Research Centre of SB RAS. Geokhod was made on the basis of the Kemerovo Experimental Mechanical-Repair Plant (KORMZ).

The facility has no analogs both in Russia and all over the world. The geokhod of Tomsk Polytechnic University can be applied at tunneling works and the construction of underground communications, subway, to rescue people in emergencies etc. The development has already sparked interest amid government companies from the Ministries of Emergency and Defense, as well as Mosmetrostroy and other companies.

Now the experimental sample of the geokhod is being tested at the site of Kemerovo Experimental Mechanical-Repair Plant (KORMZ) for the first time. For this aim the expert of the enterprise produced a technological concrete block of 6x6x10m.

“The trial include a few stages. The geokhod goes through the block a set distance and stops, we examine its technical condition, measure parameters, assess results, correct work if required and start the machine again. Out task is to collect as much as possible scientific and technical data on the available 10 meters and to prove the declared specification capabilities of the prototype,” –

The prototype of the geokhod is the cylinder of 3,2 m in diameter and 4,5 me in length. The main edge to existing equipment is the weight and dimensions. For instance, a tunnel boring machine with similar sizes weighs circa 50 tons (there are heavier ones up to 500 tons). The geokhod weighs just about 20 tons.

According to scientists, existing mining equipment works at the expanse its weight. The higher weight, the harder crowding power is possible to apply on boring. It does not engage geoenvironment. The geokhod does not only move through the rock but uses it to generate traction and pressure forces.

“The geokhod is equipped with special cutter bars and outer propellers along the outer circuit, wings as contra-rotating part at the tail section. We give the whole application of the power to geological environment, the rock, and then, for the first time in the mining industry, we solve a classic problem how to reduce weight and size characteristics,”- tells TPU Prof Vladimir Aksenov, head of the Laboratory of underground robotics at the Coal and Coal Chemistry Federal Research Centre of SB RAS.

The project costs 200 million rubles, this is investments of KORMZ and the funds allocated by the Ministry of Education and Science of the Russian Federation. The cost of the unit will be about 40 million rubles, and it is made almost entirely from domestic components.

The development of the multi-purpose system “Geokhod” started in May 2013 within the RF Government decree №218. The polytechnicers carry out the joint project along with JSC KORMZ, a Kemerovo-based company Finist, the Coal and Coal Chemistry Federal Research Centre of SB RAS and engineers from mechanical engineering enterprises.