The rate of vertical degradation of subsea permafrost in the East Siberian Arctic Shelf (ESAS) is 18 cm a year over the past 30 years, which is greater than previously thought. Scientists received this data after the comprehensive study of subsea permafrost not only in the Russian Arctic but also in the Arctic as a whole. 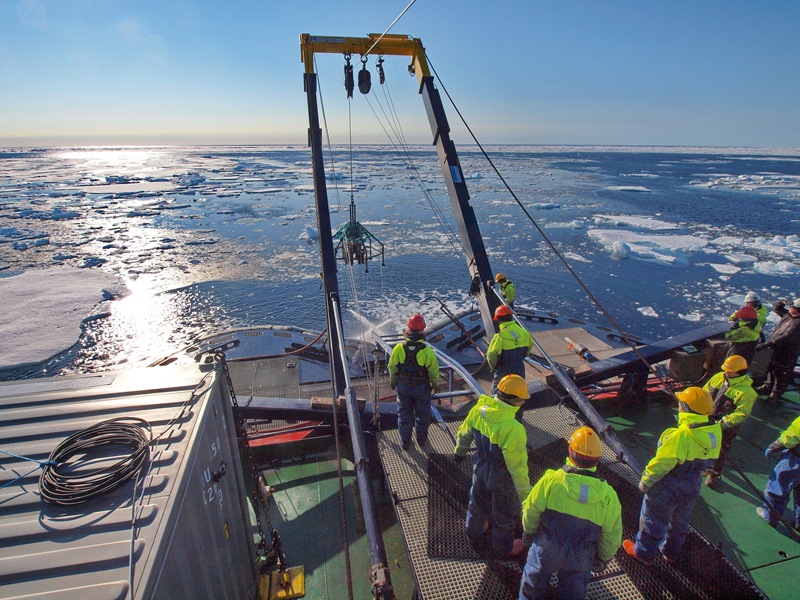 Photo: SWERUS-3 expedition in the Arctic.

TPU scientists and co-authors from Russia and Sweden have recently published findings of the study in Nature Communications.

Earlier it was believed that the bulk of subsea permafrost in the ESAS is continuous that eliminates the destabilization of a giant pool of lower-laying methane hydrates. According to the model estimates of the Intergovernmental Panel on Climate Change (IPCC), until the end of the 21st century the degradation of permafrost in the ESAS cannot exceed several meters and the formation of through taliks will take hundreds or thousands of years that eliminates the opportunity of massive methane (CH4) emissions from the bottom sediments of the ESAS into water column - atmosphere system due to the destruction of hydrates. Thus the IPCC considers the potential contribution of the ESAS into the emissions of CH4 as insignificant. The paper shows that the model is not really correct.

Basing on the repeated drilling of four wells performed by the Institute of Permafrost Siberian Branch of Russian Academy of Sciences in 1982-1983, scientists have proved that the rates of vertical degradation of subsea permafrost amount to18 cm a year over the last 30 years (the average is 14 cm a year) which is greater than it was assumed before.

‘New data obtained by complex biochemical, geophysical and geological studies conducted in 2011-2016 resulted in the conclusion that in some areas of the East Siberian Arctic Shelf the roof of the subsea permafrost had already reached the depth of hydrates’ stability the destruction of which may cause massive releases of bubble methane. According to our findings published earlier in Nature Geoscience, Science and Philosophical Transactions, Royal Society, the size of CH4 bubble flaw from the bottom sediments into the ESAS water can vary from milligrams to tens or hundreds of grams per square meter a day depending on the state of subsea permafrost, which leads to the concentration increase of atmospheric CH4 in the surface layer to values 2-4 times exceeding background concentrations measured in our planet,’ says the first author of the paper Professor Natalia Shakhova, the TPU Department of Geology and Minerals Prospecting.

She notes that these findings were confirmed during the expedition to the East Siberian Arctic Self in 2016. The expedition was organized and conducted jointly with the scientists from the Pacific Oceanological Institute FEB RAS, with the participation of the Institute of Oceanology RAS and the Institute of Atmospheric Physics RAS. More data will be published in 2018.

‘The results of our study ensure fundamentally new insights of the mechanism of processes responsible for the state of subsea permafrost in the East Siberian Arctic Shelf which, according to various estimates, concentrates up to 80% and more of entire subsea permafrost in the Northern Hemisphere, under which there are huge hydrocarbon reserves in the forms of hydrates, oil and free gas.

Besides, based on this data approaches to studying of subsea permafrost and its mathematical simulation will be revised and changed. This is critical for the reduction of geo-risks arising during the exploration and industrial drilling. However, there are still many unresolved issues which our research team will deal with,’ says Associate Member of Russian Academy of Sciences Igor Semiletov, Head of Arctic Seas Carbon Research International Lab, TPU.